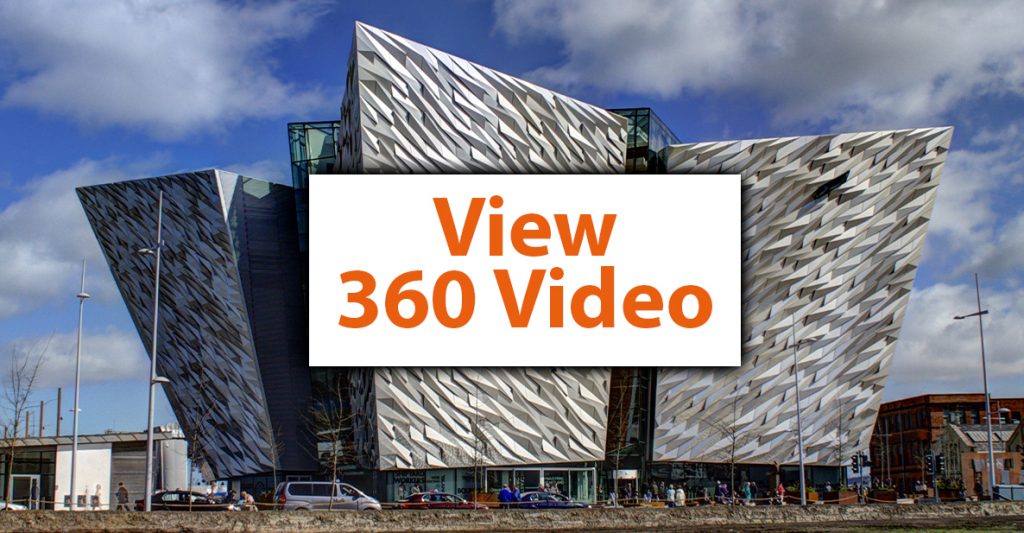 Titanic Belfast is a visitor attraction opened in 2012, a monument to Belfast’s maritime heritage on the site of the former Harland & Wolff shipyard in the city’s Titanic Quarter where the RMS Titanic was built. It tells the stories of the Titanic, which hit an iceberg and sank during her maiden voyage in 1912, and her sister ships RMS Olympic and HMHS Britannic. The building contains more than 12,000 square metres (130,000 sq ft) of floor space, most of which is occupied by a series of galleries, private function rooms and community facilities, plus the addition of Hickson’s Point destination bar in March 2018.
The building is located on Queen’s Island, an area of land at the entrance of Belfast Lough which was reclaimed from the water in the mid-19th century. It was used for many years by the shipbuilders Harland and Wolff, who built huge slipways and graving docks to accommodate the simultaneous construction of the Olympic and Titanic. The decline of shipbuilding in Belfast left much of the area derelict. Most of the disused structures on the island were demolished. A number of heritage features were given listed status, including the Olympic and Titanic slipways and graving docks, as well as the iconic Samson and Goliath cranes.

A number of ideas were put forward for the attraction. Among ideas considered were reconstructing the massive Arrol Gantry in which Titanic and Olympic were constructed, or building an illuminated wire frame outline of Titanic in the dock in which she was fitted out. In June 2008, details of a project – known then as the “Titanic Signature Project” – were announced. Northern Ireland’s Tourism Minister, Arlene Foster, announced that the Northern Ireland Executive would provide 50 per cent of the attraction’s funding through the Northern Ireland Tourist Board, with the remaining 50 per cent coming from the private sector, in the shape of Titanic Quarter Ltd, a sister company of Harcourt Developments, and the Belfast Harbour Commissioners. Additional funding was pledged by Belfast City Council. The task of creating the visitor attraction was taken on by Harcourt Developments, who enlisted the help of the American architect Eric Kuhne and British exhibition designers Event Communications. The building, now known as Titanic Belfast, was expected to attract 425,000 visitors annually, of whom between 130,000 and 165,000 would come from outside Northern Ireland. It is intended to serve a similar transformational function to that of the Guggenheim Museum Bilbao, designed by Frank Gehry, as a focus for the regeneration of the city. It forms part of the Titanic–related heritage sites in Titanic Quarter, including the disused headquarters and drawing offices of Harland & Wolff, the SS Nomadic – the last surviving White Star Line ship – and Hamilton Dock, Titanic’s Dock and Pump house and the Titanic and Olympic slipways.

First year visitor numbers significantly exceeded projections, with 807,340 visitors passing through its doors, of which 471,702 were from outside Northern Ireland, according to Titanic Belfast.

Titanic Belfast had a record-breaking year in 2017/18 with 841,563 people visiting the tourist attraction and the year before saw the Titanic Museum take home the World’s Leading Tourism Attraction Award at the World Travel Awards (2016) In the same year, Titanic Belfast saw 84% of its visitors coming from outside Northern Ireland.

The building’s design is intended to reflect Belfast’s history of shipmaking and the industrial legacy bequeathed by Harland & Wolff. Its angular form recalls the shape of ships’ prows, with its main “prow” angled down the middle of the Titanic and Olympic slipways towards the River Lagan. Alternatively, it has been suggested that the building looks like the Titanic, and locals have already nicknamed it “The Iceberg”. Most of the building’s façade is clad in 3,000 individual silver anodised aluminium shards. It stands 126 feet (38 m) high, the same height as Titanic’s hull.

The interior of the eight-storey building provides 12,000 square metres (130,000 sq ft) of space. Its centrepiece is a series of interpretive galleries exploring aspects of the building, design, sinking and legacy of Titanic.
On the top floor of the museum is Belfast’s largest conference and reception space, the Titanic Suite, a banqueting facility capable of seating 750 people.
A reproduction of the original staircase on the Titanic, made famous by the James Cameron film Titanic in 1997, is located in this conference centre. The building also provides education, community, retail and restaurant facilities plus a community resource centre.